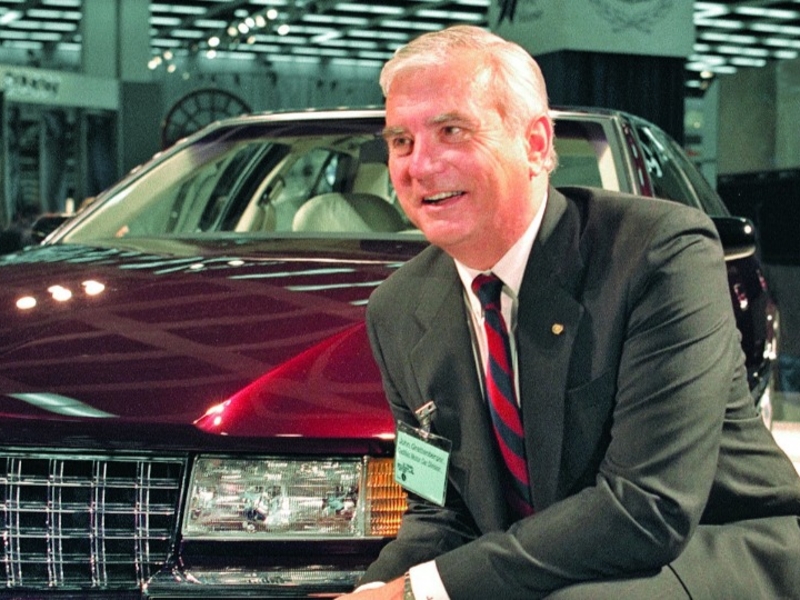 When John Grettenberger arrived as Cadillac’s general manager in 1984, the General Motors luxury division — the nation’s top luxury marque for years — was still selling a lot of cars, but the brand was reeling.

German stalwarts Mercedes-Benz and BMW — with their taut suspensions, powerful and sophisticated overhead-cam engines, floor shifters and class-leading safety equipment — were poaching Cadillac customers in droves. And there was a new juggernaut, Japanese luxury brands from the likes of Toyota, Nissan and Honda, just around the corner.

Thirteen years later, when Grettenberger retired, Cadillac’s image had been rebuilt. And a seed he planted, the Cadillac Escalade SUV that debuted in 1998, has grown to become one of the most — if not the most — profitable and important nameplates in GM’s lineup today.

Yet when Grettenberger stepped down in 1997, it also marked the last year Cadillac was the nation’s top-selling luxury brand after decades on top.

While GM executives are retooling Cadillac yet again for a new era — electrification — it is Grettenberger, who died of cancer March 17 at age 82, who gets credit for the brand’s original turnaround.

As a GM vice president in those days, Grettenberger had wide responsibility for sales, product planning and the plants that built Cadillac’s cars. He made shoring up Cadillac’s quality one of his first priorities.

Just three years after he took over, Cadillac’s fortunes were changing. In 1990, Cadillac won the Malcolm Baldrige National Quality Award — the only automaker to ever win the prestigious honor. New products and new engines were on the way, and Grettenberger began lobbying GM directors to approve bold plans for an ultraluxury SUV to take on Range Rover and other upscale off-road vehicles.

Grettenberger looked the part of a Cadillac man. He was tall and slim, with striking grayish-blond hair, and a complete gentleman, recalled Vince Muniga, who helped lead Cadillac communications during most of Grettenberger’s 13-year tenure.

“I can’t think of anyone who personified Cadillac like he did. He looked like a Cadillac owner,” Muniga told Automotive News. “He just looked the part, very Cary Grant-esque. And he was … a true leader. He never had to ask you to do anything because you felt like you wanted to do something for John Grettenberger.”

John O. Grettenberger Sr. was born in Okemos, Mich., near Lansing, in 1937 and graduated from the University of Michigan. He was an officer in the Navy for three years and then, in 1962, began his GM career as a clerk in Oldsmobile’s Los Angeles office. He later held numerous sales posts.

His career took off in 1972 after he earned a master’s degree in management. He was a marketing consultant to Isuzu in Japan in the early days of GM’s involvement with the Japanese automaker, then moved to Europe, where he became a member of Opel’s board.

In 1984, he was handed the reins of Cadillac — one of the biggest messes in GM’s history.

Three years after Grettenberger arrived, a new kind of Cadillac, the Allante two-seat roadster, started to change people’s perceptions of what a Cadillac could be. The car’s body was made in Italy by Pininfarina and shipped to Detroit on specially equipped 747s as part of what GM called the world’s longest production line. Each plane in the “Allante Air Bridge” that landed in Detroit contained 56 bodies that were then transported to Cadillac’s Detroit-Hamtramck Assembly plant for installation of the powertrain and other parts.

Cadillac sold about 21,000 Allantes from 1987 to 1993. Though the car had a few technical glitches, it did accomplish a key mission: Give Cadillac a car to compete with Mercedes and Jaguar convertibles.

“He brought the Allante on, and it generated about 40 percent of all the press for Cadillac,” Muniga said. “People loved driving that car.”

The 1992 model year brought the European-inspired Seville STS sports sedan and Eldorado Touring Coupe, and the brand began getting real traction in the market with cars that appealed to younger buyers. The following year, Cadillac introduced the Northstar V-8, the company’s four-cam, 32-valve aluminum V-8 engine.

But a small sport sedan Cadillac introduced in the mid-1990s, the Catera, a rebadged Opel Omega MV6 targeted at younger buyers, fell short of expectations.

Still, Grettenberger noticed consumers were spending more and more on pickups and SUVs, and he wanted Cadillac to lead the way for American manufacturers.

Muniga recalls Grettenberger’s product planners fighting for a Cadillac SUV years before Ford beat GM to the market with the 1998 Lincoln Navigator.

“In 1992 or 1993, I was asked to go into a staff meeting. They had proposed [an SUV] for Cadillac. There was a lot of conversation about it. We saw where the market was headed, but you still had the traditional Cadillac buyer,” Muniga said. “There was a lot of discussion about whether the traditional Cadillac buyer would accept this. On the other side of the fence, we had to get younger people in our vehicles.”

GM, beset with a host of financial, quality, manufacturing and other problems, did not approve Cadillac’s request for an SUV.

In 1997, as Grettenberger was retiring, Lincoln introduced the Navigator, which became a big hit for Cadillac’s biggest rival. That’s when GM’s board finally approved a Cadillac-badged SUV. In just seven months, the Escalade — a barely disguised GMC Yukon Denali — appeared in Cadillac showrooms.

After Grettenberger’s retirement, he returned to Lansing and worked in his family’s oil business. In later years, he served on the boards of directors for several companies.