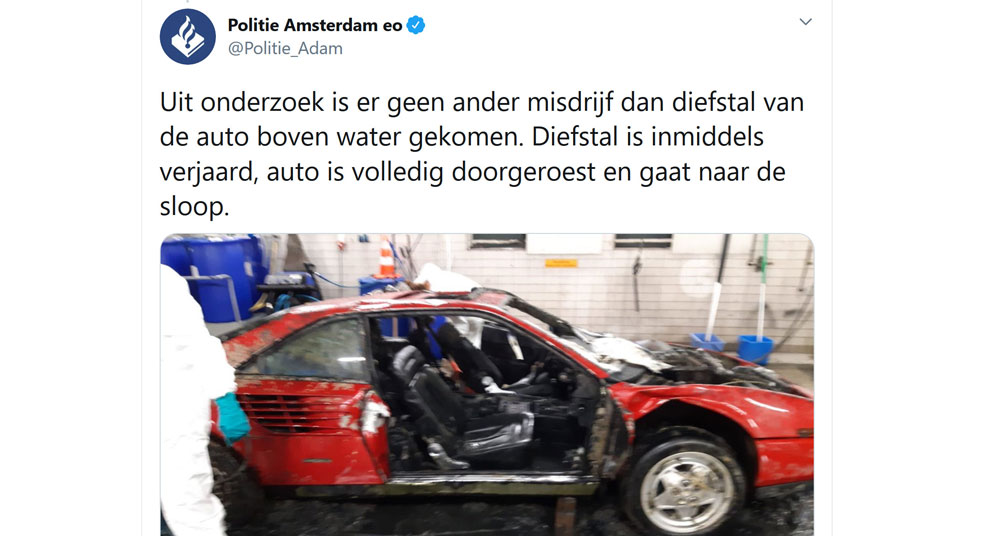 A 1987 Ferrari Mondial that was stolen in the Netherlands back in 1994 has been recovered after potentially spending as long as 26 years in one of the city’s many waterways.

Local media reports that the Mondial was first found by Dutch fire brigade divers on a training exercise in Amsterdam’s IJ waterway in June. Police were notified of the strange discovery on June 17 and they organized their own dive on June 29. After encountering some issues in recovering the vehicle, the Ministry of Defense was called in to provide assistance and on July 8, the Italian sports car was pulled up from the waterway.

Read Also: How Could ANYONE Let 11 Classic Ferraris To Die On A Field?

Before long, authorities were able to determine that this was the missing Mondial from the 1994 case. What they haven’t been able to determine is just how long the Ferrari was at the bottom of the waterway. Regardless of whether or not it has been there for the full 26 years it has been missing, it has been utterly destroyed and rusted by the water.

Police were not able to find any evidence in the vehicle that could point them towards the perpetrators but did conclude that no violent crime had occurred within the vehicle. The car was then handed over to its insurer and placed in a scrapyard.

In a statement issued to The Drive, the scrapyard said it has put the Mondial up for display because of all the interest in it.

“We have put the car for display at our company for now. There is a lot of interest in the car. Both complete and for parts. The thing is that we are not allowed to sell the car complete. However, when it could go to a museum, the government will make an exception, and allows us to sell the car complete. When [sic] we can’t find a museum willing to display the car, we are forced to dismantle the car in parts. Most parts can’t be used on a other car, but a lot of collectors are willing to buy parts for collectables, or to transform them into furniture. Like the engine, they want to fix up and turn it into a table with a glass plate on top of it.”